Just a couple of weeks ago I purchased a new cell phone because the coverage in Dothan was not acceptable with AT&T. So I went with Sprint and got the HTC Hero. The first app I downloaded was the Echolink App. I did not know it was even out yet although I knew they were working on it due to the success of the iphone version of the app. So today I got to play with the new app and let me say it is awesome. I did not have to do anything but download the free app. I was able to connect to a repeater in Rowlett TX just outside of where I used to live and talk to my friend K5RXQ. Later I talked to my Dad N5ME in Memphis on the repeater there and directly using his computer. It worked great and I did not have to do anything with the settings. If you are familiar with Echolink for the PC, you know there is a lot of setting up to do just to make it work. I think they hit a home run with this app and really makes me want to play more with Echolink. 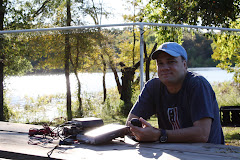